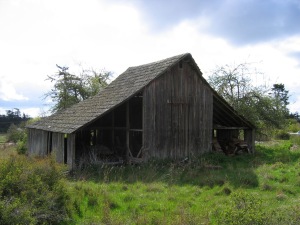 March goes ‘In like a lion, out like a lamb,’ and it certainly is the time of year to see many lambs frolicking in barnyards and pastures throughout the islands!  Sheep raising has been an important part of the islands’ agricultural economy ever since the Hudson’s Bay Company first introduced a flock of 1,369 in December, 1853 to Belle Vue Sheep Farm on the southern end of San Juan Island. Eventually, a record number of 18,789 sheep were recorded in the 1930 census.  Even though flocks declined after the 1950s, sheep still constitute a sizeable portion of the farming landscape.  The 2002 census counted 2,731 sheep and lambs, the largest per county in Western Washington. 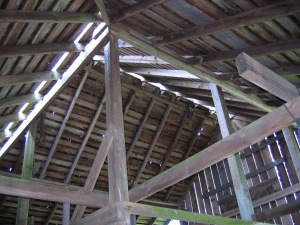 Roof Structure with Hay Door in the Gable on the Right

With its distinctive plan of a central hay mow surrounded on three sides by sheds, the Frazer Farm Barn was specifically designed as a sheep barn.  Oriented east-west, the central, gable-roofed 26′ high hay mow is 19′ wide by 24′ feet long, with 16’6″ sheds to the north and south and a 16′ shed to the east.  Milled lumber posts and beams support the central structure as well as the side walls and roof.  The central mow was loaded through a hay door in the side without sheds and used to feed the sheep in the sheds on the other three sides. 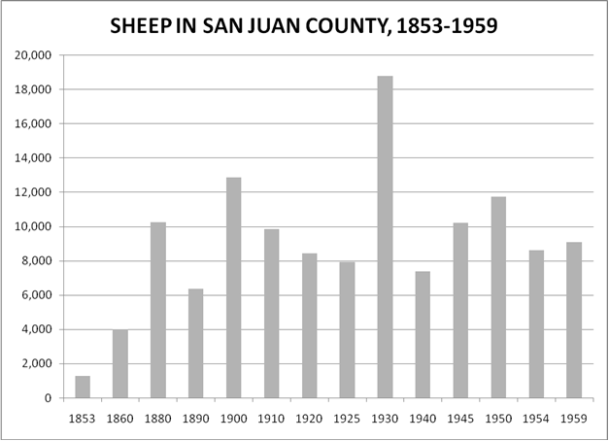