Salt Box.  A gable-roofed structure with a shed or lean-to added on one side, integral to that slope.

Isabella Bloor Barn, Lopez Island.  Probably built around 1905 by John Burt, this barn has a main 30′-wide by 40′-long area (the hay mow)  under the gable with an 18′-wide shed forming the saltbox roof.  It is 30′ in height.  The main structure is log post and beam with milled lumber framing.  There is a prominent hay hood.  A nearby milk house indicates that it was used as a dairy barn.

Gordon Buchanan Farm (Old) Barn, San Juan Valley, San Juan Island.  There are two barns on the farm run by Gordon Buchanan; this one is older, probably dating from the 1890s.  Oriented east-west, it consists of a 30’6″-wide by 50′-long, 30′-high hay mow with 18′-wide sheds on the west and north sides.  The west shed, which had a concrete floor added in the 1920s, contained stanchions; there is a walkway between the mow and the north shed, which contains horse stalls today.  In addition to the other barn, the farmstead includes a house, granary, milk house, and smoke house. 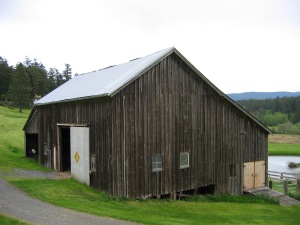 Chalmers Farm Barn, Crow Valley, Orcas Island.  The barn on the old Chalmers Farm is sited on a slope so as to take advantage of different levels for different farm functions.  The main gable structure is a five-bay timber frame, with the shed forming the saltbox added downslope to house a milking shed below and a loft above.  The structure measures 26′ wide by 50′ long and is 27′ tall; the saltbox shed extends 17′ downslope to the east and there is another 18′-wide open shed on the north gable.  The hay mow can be accessed at floor level, while the cows enter the milking shed at a level downslope. 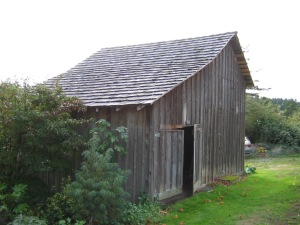 Frank Doyle Barn, Friday Harbor, San Juan Island.  One of at least four barns that were located in Friday Harbor, the Frank Doyle Barn is a surviving example of a small operation at the edge of town limits.  Oriented north-south, the 15’8″-high gable-roofed portion measures 14′ wide by 18′ long, with a 8’6″-wide shed addition, accessed by double doors, forming the saltbox to the east.  The shed was used for milking.

Joseph Gallanger Barn, Lopez Island.  This log post with milled beams and braces barn has a center entry drive with a shed on one side to form the saltbox.  The main gable area, which measures 38′ wide by 55′ long and is 33’7″ tall, probably had hay mows on both sides; the 18′ shed probably had milking stanchions.  A nearby milkhouse was for separating and cooling the cream.  There is also what may have been a granary in the farm complex.

William Gallanger Barn, Lopez Island.  Built ca. 1925-26 by William Gallagher (1868-1965) and his son Bill, this is one of the few remaining barns on Lopez that is still used for agricultural purposes.  The Gallaghers originally built the structure as a dairy barn, for 59 cows, which was one of the largest operations in the islands.  The barn measures 30′ wide by 100′ long, with a 20′-wide shed on the east; it is 39′ high.  The structure exhibits a mix of old and new architectural technology with a center drive plan and a pre-fabricated ‘bent’ system combining round log posts with dimensional lumber beams, plates, girts, purlins, and rafters.  Concrete floors and plinths were added as foundational support for the structure, and a (then) state-of-the-art milk house appended to the southwest corner.  Also of note are the two blue Harvestore silos, the only known examples in the islands–which also indicates the relative magnitude and important of the operation.  It is listed on the Washington Heritage Barn Register. 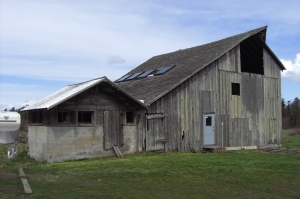 John Lawson Farm Barn, San Juan Island.  Originally homesteaded by the Boyce family and farmed by the Wades, this property eventually became the John Lawson Farm.  There was originally a farm house there, which was moved; in addition to the barn there is also a milk house, granary, and machine shed.  Oriented east-west, the main hay mow portion of the barn is 24′ wide by 40′ long and 26’6″ high; a 20′-wide milking shed extends along the south side and wraps around the corner to run along the west side.  The hay door is on the east side, accessing a wood rail and steel trolley hay system.  The milk shed features a vacuum milking system; the cows entered the shed via a ramp and door on the southwest side.  The gable-roofed milk house abuts the southeast corner of the barn.

Ray Madden Barn, San Juan Island.  This small barn has 16’6″ by 24’6″ long, 21′ high hay mow with a 9’6″-wide shed with stanchions on the west side.  The mow has a hay door in the north gable and a wooden hay rail.  Apparently Ray Madden was not a farmer; he was a builder from British Columbia who was a reals estate agent here on the island.  Someone else used the barn. 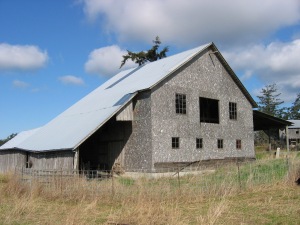 Morley Farm Barn, San Juan Valley, San Juan Island.  This farm complex has a large number of farm buildings, including another barn used for poultry (see Morley Farm Poultry Barn under Gable), house, chicken coop, machine shed, root cellar, and water tower.  Oriented east-west, this barn has a lofted hay mow under the gable and a shed addition on south side to form the saltbox.  The gable area is 38’6″ square, with the ground floor at 8’9″ high and the loft at 22′ high.  Because parts of the gables have been resided, it is hard to tell if there was a hay door, but a wooden hay rail with steel trolley still exists.  This main portion of the barn was distinctively sided with shiplap; some of the original walls still remain.  The shed, which is open to the east, is 16′ wide.

Oscar Peterson Barn, San Juan Island.  Oriented east-west, this barn has a gable-roofed hay mow that measures 24’6″ wide by 32’6″ long and 26’6′ high; one 20′-wide shed on the south forms the saltbox and another on the west forms a hip.  The mow has a barn door and steel rail and trolley hay system.  The shed on the south, illuminated by a bank of windows, had stanchions with entries on the west and east; the other shed may have been used for stalls.  The farm also has a house and distinctive poultry house.

John B. Reed Farm Barn, Lopez Island.  Built by John B. Reed around 1929, this barn was part of a farm complex that included a house and chicken house.  Built with timber frame, it has a center-access plan with a shed on a higher level of the slope that forms the saltbox form on the roof.  With a height of 32’3″, the main portion measures 30′ wide by 54′ long and the saltbox shed is 18′ wide; there is also another, newer 18′-wideshed on the west gable side.  The two sides of the drive were probably used as hay mows, although a loft has been added to one. 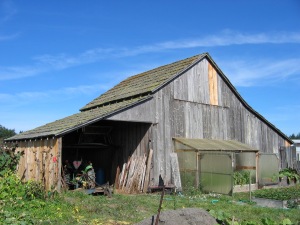 Joe Sandwith Barn, San Juan Valley, San Juan Island.  This barn is a simple gable-roofed hay mow with a shed added on one side for dairying to form a saltbox.  Another open shed was added on the other side for calf pens.  The 21’2″-high main gable is actually square–22′ by 22′–with the milking shed (complete with 6 stanchions and a manure gutter) extending 15’8″ to the east and the calving shed 14′ to the west.

Sofaer Barn, Orcas Island.  This three-bay log post-and-beam barn has a 28′-wide by 40’8″-long, 29’6″-high main gable for the hay mow and a 12’8″-wide milking shed that forms the saltbox; there is also a small 11′-wide by 32′-long shed on the north gable.  Hay was delivered through the center-drive door and there is no evidence of hay doors or a hay track and trolley.  Although cleared of its stanchions, the milking shed still has the depression for the manure gutter. 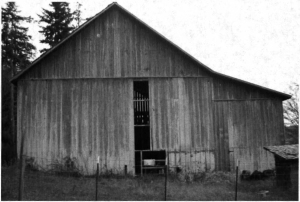 Steinbrueck’s Place Barn, Lopez Island.  Built around 1915 as a hay barn, this structure has also been used over the years as storage for pea straw as well as tarred reef nets.  The center entry, saltbox-roofed structure measures 45′ wide by 65′ long and is 35′ high.  It is listed on the Washington Heritage Barn Register.

Sweetwater Farm, West Valley, San Juan Island.  Originally built by the Alfred Lawson family around the turn of the last century, this barn is timber frame, with a center-entry hay mow and sheds for stalls added onto the west and south sides.  The barn measures 56′ wide by 60′ long with a saltbox roof.  The Sweetwater Farm Barn is listed on the Washington Heritage Barn Register. 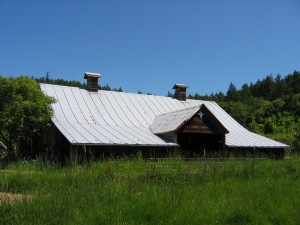 Warm Valley Farm Barn, Orcas Island.  This structure was built in 1901 as a fruit barn for George Meyers by carpenter and builder F. J. Reddig.  Oriented north-south, the gable section, which is one story with an attic, measures 24′ wide by 48′ long and is 18’6″ high.  There is a 12′-wide shed on the west side with a dormer that allows for access and shelter to the center drive.  Two tall ventilators on the roof drew warm air out of the building, and the frame walls and ceiling were packed with sawdust to help insulate the fruit storage space on the ground floor.