ADVISORY!  Most of the barns in the San Juan Islands are privately owned.  The goal of this website is to provide information about these historic barns while respecting barn owners’ private property.  Many barns can be viewed from public right-of-ways.  Please respect those barns that are on private property and do not trespass! 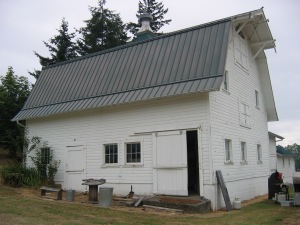 Arcady Farm.  The barn on Arcady Farm is one of a complex of  several farm buildings, including a machine shed, chicken coop, water tower, and several garages and sheds.  Constructed as a dairy barn, it has a 4′ high concrete stem wall supporting a wood-frame lower story for milking stanchions and stalls and wood-truss upper story for the loft.  The loft features a wooden hay rail with trolley and hay hood and doors on the north façade.  An interesting feature is a wooden ventilation shaft that extends from the lower story along the inside of the middle of the west wall to the roof ridge, topped by a metal ventilator.  The barn measures 30′ wide by 36′ long and is 29′ high (first story 10′ and hay loft 19′).

Bret Barn.  The Bret barn is a simple gambrel-roofed structure constructed of log posts and cross beams and braces with a milled lumber frame.  It measures 30’6″wide by 39’9″ long and is 28’6″ high.  It was probably all one open space, given that it has a hay door with hood and wooden track and trolley system; it currently has a loft.

Chalmers Farm Barn, Crow Valley.  The barn on the old Chalmers Farm is sited on a slope so as to take advantage of different levels for different farm functions.  The main gable structure is a five-bay timber frame, with the shed forming the saltbox added downslope to house a milking shed below and a loft above.  The structure measures 26′ wide by 50′ long and is 27′ tall; the saltbox shed extends 17′ downslope to the east and there is another 18′ open shed on the north gable.  The hay mow can be accessed at floor level, while the cows enter the milking shed at a level downslope.

Coffelt Farm Barn, Crow Valley.  Relatively new (1950s) and designed as a sheep barn, this structure consists of a main gable with flanking sheds.  It is built with log posts in the ground, log beams,  and frame sides walls and roof.  A single story structure, it measures 38’10” wide by 32′ long and is 15′ high. 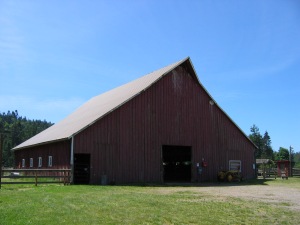 Coffer Barn.  This barn was built in 1946 for Phil Coffer by a noted local builder, Mr. Hathaway.  The plan consists of a central, floor-to-ridge hay mow with stables on either side.  In addition to large doors on the northwest gable and a door leading to the northeast side aisle, there is a hay door and hay hood on the northwest gable.  The post-and-beam structure is oriented northwest-southeast, measures 60′ wide by 68′ long, and is 37′ high. 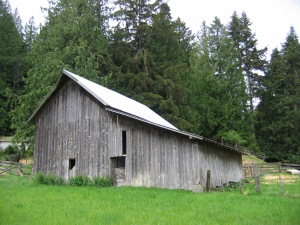 Englehartson Barn.  This barn is a four bay timber frame structure oriented east-west with a shed on the north side.  It measures 24′ wide by 36′ long, with the shed adding another 20′, and is 26′ high.  Under the gable is the hay mow, which is accessed with a hay door and hood, and has a steel track and trolley.  There is a partial loft in the mow, and the shed was used for milking stanchions.

Guilford Farm Barn.  This large, 58′ wide by 78′ long structure originally started life as a dairy barn, with a center drive probably flanked by a hay mow and a threshing floor.  It has timber frame construction, and consists of 4 bays that are surrounded by sheds that form the gable-on-hip roof.  The central gable, which is 20′ wide by 45′ long, is 24′ high.  A concrete-block milk house was added later to the southwest corner.  This barn has been repurposed several times, first as the national headquarters of an optical production company and later as a residence and studio.

Burl [Byrle] Hall Farm.  Byrle M. Hall bought this property from Johann P. Legbandt in 1944, and allegedly built this barn as part of a government effort to encourage farming after WWII.  The roof is pitched steeply, extending all the way down to the first floor.  Oriented north-south, the structure is 56′ wide by 46′ long and 37’6″ tall, and consists of a central floor-to-ridge hay mow flanked by stables.  Used as a dairy barn, it once had stanchions with a manure gutter in the concrete floor, as well as a hay rail and trolley, with a hay door in the north gable.

Hambly Apple House, Crow Valley.  Built by William Hambly in 1900, this two story structure was designed to keep apples cool before being shipped.  The lower, 20″-thick stone masonry portion has vents near the ground that introduce cool air that then circulates upward through the vent in the wood frame roof on the floor above.  To help insulate the basement, the spaces between the joists of the ceiling were filled with sand.  The upper floor was probably used for fruit box construction and storage.  The structure measures 24′ wide by 30’4″ long, with the basement height at 8’2″ and the superstructure 13’4″.

William Hare Barn, Crow Valley.  Built as a dairy barn, this structure is sited on a steep slope, with a post and beam lower floor (supported on concrete piers) and a wood-truss loft.  The barn features a concrete stem wall and floor built into the slope, with an adjoining milk house, an interior hay drop, a wood hay rail with trolley, and hay door and hood on the west side.  The structure is oriented east-west, and measures 38′ wide by 42′ long, with a 8’6″ lower floor and 24′ loft. 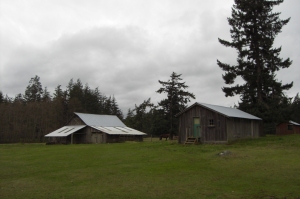 James Jorgensen Barn.  Danish immigrant James Jorgensen homestead this place in 1883 and the barn was probably built around 1890.  The broken gable-roofed structure measures 42′ wide by 53′ long, and is 25′ high, with a 20′ by 20′ loafing shed added.  The central portion is a floor-to-ridge hay mow, while the adjoining shed features stanchions with a manger and a manure gutter.  The barn is listed on the Washington Heritage Barn Register.

Leatherwood Farm Barn.  Built by Henry Leatherwood in 1931, this barn was used for haying on what was mostly a strawberry farm.  Oriented roughly east-west, the log post-and-beam structure measures 36′ wide by 40′ long and is 23′ high; an 11′-wide open shed has been added to the north side.  The barn has a hay door with hood as well as a steel track and trolley with a bayonet-style hay hook in place.  There is the ruin of a milk house nearby.

Carl Lehman Barn.  Designed by owner Carl Lehman and built with Ray Pineo, this barn was constructed in 1946 on the 160-acre Deep Meadow Farm.  Outbuildings included a farm house, milk house, and chicken house.  The barn was used as a dairy barn, with concrete stem walls and floor, and stanchions and manure gutters.  The lower story is wood frame, while the loft is wooden-truss.  The loft features a metal hay rail and trolley and a hay door with hood on the north side.  Oriented north-south, the structure is 38′ wide by 50′ long, with a 20′-wide shed on the west side; the lower floor is 8′ high and the loft is 24′.

William Loos Barn, Eastsound.  According to Ray McBride, William Loos built this barn on Indian Point in the 1930s, and in the 1950s his grandson Ed Lavender move it to Eastsound, where it stands today.  Most gambrel roofed barns in the islands are “Dutch,” having a “knuckle” or upturned eave, but this one is “English,” having a straight slope at the eave.  Two stories with a center drive, it had a hay door and hood with a steel hay track and trolley.

Mathesius Farm Dairy Barn, Crow Valley.  The barn on the Mathesius Farm is one of a complex of several farm buildings, at one time including both a small and large milk house, hog barn, machine shed, and farm house.  Designed as a dairy barn, it has concrete floors and stem walls, with a wood-frame lower story and wood-truss hay loft.  Interesting features include wooden stanchions, poured concrete manure gutters, and three metal ventilators on top of the gambrel roof.  Oriented east-west, the structure measures 42′ wide by 64′ long, with an overall height of 44′ (9’6″ on the lower floor; 34’6″ for the loft).

Nordstrom Barn, Crow Valley.  Settled by Andrew Nordstrom in 1901, this quarter-section farm originally had pear and Italian plum orchards and prune-drying operations as part of the early Orcas Island fruit industry.  The Dutch-roofed, 40′ wide by 60′ long, 30′ high structure was used primarily for hay storage, with stanchions for milking dairy cattle.  It is listed on the Washington Heritage Barn Register. 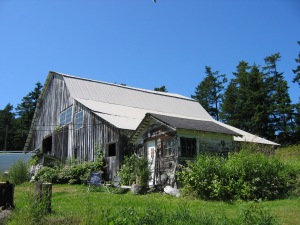 The Barn at Skyloft Ranch

The Barn at Skyloft Ranch.  Built in the 1900s on land originally homestead by Oberlin T. Loos, this barn was part of a dairy operation that provided milk and cream to the Deer Harbor area.  The main section under the gambrel roof, which measures 38’5″ wide by 42′ long and is 29’4″ high, contained the hay mow; sheds were added on the southwest side for stalls and on the northeast side for a milking shed.  The latter features stanchions and mangers as well as a manure gutter for the milk cows and is illuminated by a row of windows.  To the northeast is a separate milk house that is connected by means of a concrete walkway. 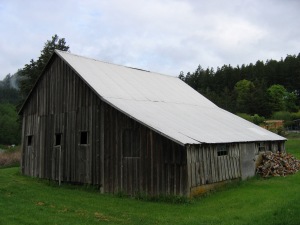 Sofaer Barn.  This three-bay log post-and-beam barn has a 28′ wide by 40’8″ long, 29’6″ high main gable for the hay mow and a 12’8″ wide milking shed that forms the saltbox.  There is also a small 11’wide by 32′ long shed on the north gable.  Hay was delivered through the center-drive door; there is no evidence of either a hay door or a hay track and trolley system.  Although cleared of its stanchions, the milking shed still has the depression for the manure gutter. 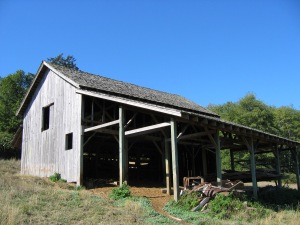 Turtleback Farm Barn, Crow Valley.  This barn was built on a farm that was originally homesteaded by Peter Frechette.  It is a simple gable-roofed structure, 24′ wide by 40’8″ long and 25’6″ high, that was built into the slope on a north-south axis.  Sheds have been added upslope on the west (6′ wide) and downslope to the east (20′).  Although there are log posts in the main section, most of the structure is milled lumber.

Waldrip Barn, Eastsound.  The only known extant Gothic-roofed barn in the San Juan Islands was built in 1918 by Jesse Waldrip.  It was designed as a dairy barn by Seattle architect W.R.B. Wilcox, based on standard plans from the Louden Company, and featured a hay hood, wooden hay rail, steel trolley, and cupola ventilator.  The barn measures 44′ by 60′, with stanchions on the ground floor and a 31’6″ tall hay loft.

Warm Valley Farm Barn.  This structure was built in 1901 as a fruit barn for George Meyers by carpenter and builder F.J. Reddig.  Oriented north-south, the gable-roofed section, which is one story with an attic, measures 24′ wide by 48′ long and is 18’6″ high.  There is a 12′ wide shed on the west side, with a dormer that allows for access and shelter to the center drive.  Two tall ventilators on the roof drew warm air out of the building, and the frame walls and ceiling were packed with sawdust to help insulate the fruit storage space on the ground floor.

E. J. Young Farm Barn.  On land originally homesteaded by John Bowman, Ed J. Young had a farm with this dairy barn at the center.  Oriented north-south, it consists of a 25′-tall, central gable-roofed hay mow that measures 44′ wide by 64′ long, with a 14’6″ shed on the east that functioned as a milking shed.  The hay mow had a track and trolley system that was accessed by means of diagonally sliding hay doors–a feature that is rare in the islands.  The barn also had up-to-date features such as an overhead manure trolley on a track that ran the length of the walkway between the mow and the stanchions and exited out the north side.  Nearby is a milk house with root cellar below.