Some barns just jump out at you as you drive around the islands, and the Norman Hodgson Barn is one of them.  Appropriately located on Hodgson Road, the simple grace of the wide spread of its gable roof is visible from a distance as you drive towards Richardson on the south end of Lopez Island.  Norman Hodgson, the stepson of Thomas Graham, was a prominent member of the Richardson community; he helped his stepfather run the Richardson Store, and probably leased his farming operations to others.  This barn may have been one of several located on his farm.

The structure is approximately 74′ wide and 32′ deep, and consists of a 32′-square center section with loft flanked by 20′ sheds.  At its peak it is about 26′ high.  According to tradition the center portion was moved from a nearby site prior to 1900; later the two side sheds and a back shed (since removed) were added in the early 1900s.  The center portion, which has a concrete foundation and floor, functioned as a granary, with a threshing floor and cribs on the side. 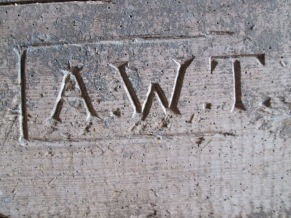 Initials carved into one of the shed walls

There are several aspects of the barn that merit further research.  Was the center portion originally built as a granary, with the outer sheds being used for livestock like swine?  Historic photos indicate that there was another barn with a silo across the road (no longer extant); perhaps this was the original hay and dairy barn?  And then there are the initials beautifully carved  into one of the shed walls; who was A.W.T.–perhaps a stone mason, given the style of the carving and the care with which it was executed?  If you have any answers, or other information, we’d love to know!