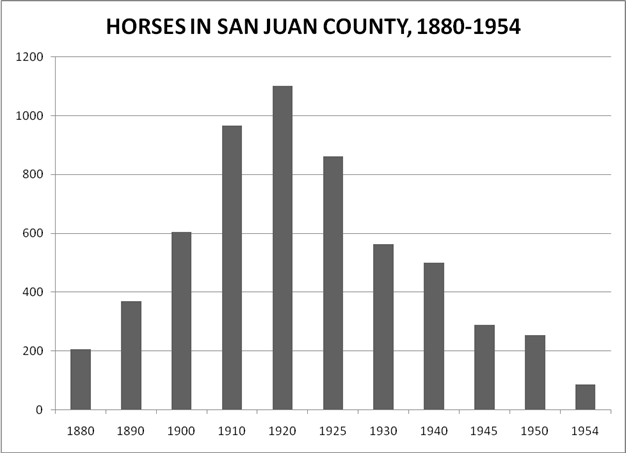 Aside from the early use of oxen, horses were the primary means of mechanical power on farms in San Juan County.  Based on federal census of agriculture figures, the average number of horses per farm in San Juan County was about 2, which would suggest that most farms only had a single team.  Tractors were introduced to the islands as early as 1924, but most farms continued to use draft horses prior to the World War II.  After reaching a high of 1,102 in 1920, the number of horses and mules in the county declined in the next several decades, but was still just below 500 in 1940.  However, it dropped precipitously after the War (1945) to 288; by 1954 there were only 85, and five years later none were recorded in the federal agricultural census.

The size and design of barns specifically used for horses depended upon the number of animals to be housed.  In the 1923 edition of Louden Barn Plans, they recommended 75-90 square feet per horse (including the alley), so a barn housing 3 teams or six horses might be approximately 480 square feet or 20 x 24′.  The stalls themselves would be about 5 feet wide by 9 feet long, although teams could be housed in double stalls of 8 by 10.  So-called “box” stalls, constructed of 2xs, would range from 9′ x 12′ to 12′ x 12′; these were used for carriage or riding horses.  Many design manuals recommend windows: “One 3’ x 3’ window should be provided for each stall, and it should always be low enough for the horse to look out” (Moore et al 1920, quoted in Minn.)  Manuals advised  “light, airy, and dry shelter” (Moore et al. 1920); ventilation was very important in horse barns, and

There appear to have been very few barns specifically dedicated to horses in the San Juan Islands, probably because of the low number of teams on farms.  Most ‘general use’ barns incorporated stalls for work horses.