Gable.  A symmetrical roof with one slope on each side.

Adams Farm, Waldron Island.  The barn on the Adams Farm is a log post-and-beam structure which measures 23’9″wide by 59′ long.  It has two sheds.  There is an assortment of associated farm buildings on the site, including a root cellar, chicken coop, milk house, corn crib, and workshop.

John Biendl Farm, Shaw Island.  Originally built as a dairy barn ca. 1910, the John Biendl Barn is one of the few in the islands with an intact silo (1919).  The gable-roofed structure measures 50′ wide by 54′ long, and is 31′ high, and is built into a slope, so that part of the floor was earth and part raised wood platform.  The barn is listed on the Washington Heritage Barn Register.

Thomas G. Blake Farm Barn, Lopez Island.  This timber frame barn is built with a center-drive with a hay mow on either side.  It is 31’3″ high and measures 34’6″ wide by 50′ 2″ long; there is a new addition on the west side.  Other farm buildings on the site include a house, chicken coop, machine shed, well house, and the foundation of a silo.

T.J. Blake Barn, Lopez Island.  This center-drive, timber frame barn was constructed by T.J. Blake in the 1890s.  It measures 40′ wide by 50′ long and is 31′ to the ridge.  There is a shed addition on the southwest side.

Coffelt Farm, Lopez Island.  Homesteaded by Jesse and Sarah Coffelt, this farmstead includes a house, barn, chicken coop, milk house, machine shed, and smokehouse.  The barn has a gable roof that covers a center-drive plan with hay mow on either side.  Built with log posts and milled beams and braces, it measures 30′ wide by 50′ long and is 31’8″ high.  The farm had multiple operations, but the barn was clearly used for hay for a dairy operation.

Art Gilmer Barn, San Juan Island.  At 52′ wide and 60′ long, this simple gable-roofed barn is one of the largest loft barns in the islands.  It has two stories: a 7’9″ ground floor and a 27’8″ loft that was used for hay, complete with hay door and hood and a track and trolley system.  The barn is oriented east-west, and the south side of the ground floor is whitewashed, with stanchions for dairy cattle. 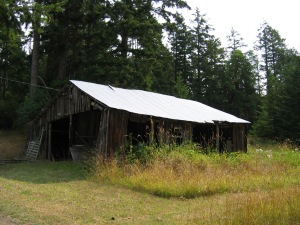 Rose Green Farm Barn, San Juan Island.  Rose Green had goats on this farm in the 1950s; it later became John Bell’s Green Tree Farm Nursery.  The barn is a simple gable structure, oriented a little bit off north-south, measuring 42′ wide by 32′ long and 14′ high.  Areas of the structure have been portioned off for a chicken coop and other uses; some partitions are made of riven cedar.  There are also two log structures nearby: a restored cabin and the ruins of what have been another cabin.

Griswold Barn, Shaw Island.  The Griswold Barn was originally built for dairy operations.  Oriented north-south, it measures 30′ wide by 64′ long, and is almost 30′ high.  It has an upper loft with hay door, rail, and trestle, and a lower floor with milking stanchions.  Owners Geb and John Nichols used the barn for their sheep, turkeys, produce, canning, feed, and hay, as well as their Red Devon Cows, a rare breed that they were reestablishing. More recently, the barn has been restored, with reinforced foundations and new, locally-milled cedar siding on three sides.

Ben Gruel Farm Barn, San Juan Island.  Oriented north-south, this barn is one of several farm buildings that include a house, chicken coop, and machine shed.  The main gable area, which was used as a hay mow, measures 18′ wide by 52′ long and is 26′ high; a full length, 14′-wide shed lies along the west side and a partial, 18′-wide shed along the north part of the east side.  The structure, which has log posts and beams but milled lumber rafters, is in poor shape, with much of the walls gone.  There are remains of the old hay door and rail and trolley system.

Hambly Apple House, Crow Valley, Orcas Island.  Built by William Hambly in 1900, this two story structure was designed to keep apples cool before being shipped.  The lower, 20″-thick stone masonry portion has vents near the ground that introduce cool air that then circulates upward and up through the vent in the wood frame roof on the floor above.  To help insulate the basement, the spaces between the joists of the ceiling were filled with sand.  The upper floor was probably used for fruit box construction and storage.  The structure measures 24′ wide by 30’4″ long, with the basement height at 8’2″ and the superstructure 13’4″.

Leatherwood Farm Barn, Orcas Island.   Built by Henry Leatherwood in 1931, this barn was used for haying on what was mostly a strawberry farm.  Oriented roughly east-west, the log  post-and-beam structure measures 36′ wide by 40′ long and is 23′ high; an 11′-wide open shed has been added to the north side.  The barn has a hay door with hood as well as a steel track and trolley with a bayonet-style hay hook in place.  There is the ruin of a milk house nearby.

Thomas McCauley(?) Barn, Lopez Island.  This structure may have been built when Thomas McCauley owned this farm.  It is a simple gable-roofed post barn that measures 36’6″ wide by 41′ long and is 18′ high.  While the open interior space is currently used as a machine shed, there is an overhang on the south side that sheltered open-air mangers for sheep. 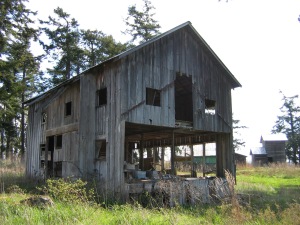 Morley Poultry Barn, San Juan Valley, San Juan Island.  One of the few structures in the islands specifically constructed for poultry raising, this barn on the Morley Farm is two stories: the top for feed storage and ventilation and the bottom for the birds.  Built on a rock outcropping and oriented north-south, the structure measures 18′ wide by 30′ long; the ground floor is 7′ high and the loft another 12′ or so.  The entry, on the north side, is into a foyer with stair, and the main floor consists of nest boxes with feed chutes.  ‘Shadow’ lines indicate that there was a gable-roofed extension off the south gable at one time. 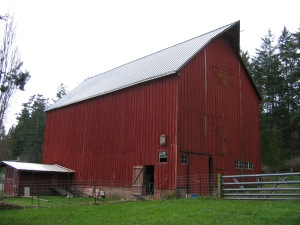 Mulno Cove Farm, San Juan Island.  This big red barn was built around 1956 by Elwyn Ackley, a descendant of Thomas Mulno, who homesteaded the land on the cove that bears his name.  Measuring 30′ wide by 60′ long, the frame structure on concrete stem walls is two stories tall, with a ground floor 9’3″ high and a 31’3″ high hay loft.  A hay trolley on steel rails delivered the loose hay to the loft.

Peter Nielsen Farm Barn, Lopez Island.  Built in 1958 as a dairy barn, this structure is relatively unique as a modern barn.  Only one story high (15’5″), it has a low gable roof over frame construction on 48″ high concrete stem walls.  The main portion has a concrete floor with a drive-in area, with mangers on the sides and stanchions in the portion of the roof that extends to the east.  A milk house, separated by a walkway, is attached to the roofline.  To the south, under an extension of the main roof, is a loafing shed.  Other farm related structures are a dwelling, old milk house, shed, and possibly an older barn. 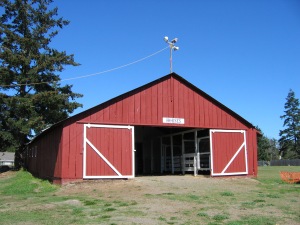 San Juan County Fair Horse Barn, San Juan Island.  This horse barn was constructed in 1924 as part of the San Juan County Fairgrounds just south of the Friday Harbor town limits.  It consists of two sections: an older, 30′-wide, 110′-long, 17’8″-high section to the north and a newer, 36′-wide by 82′-long, 18′-high section to the south.  Both sections are wood frame on top of concrete stem walls with wood truss roof systems.  Stalls line both side of a central aisle on the inside, and there are additional stalls in sheds added to the east side of the building.  The building is located in the northeast corner of the fairgrounds, where there is a practice arena and other, separate horse stalls. 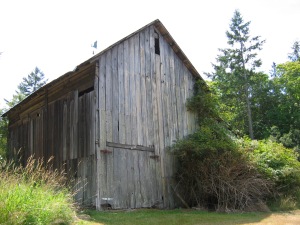 Shaw Farm Barn, Shaw Island.  Built by William J. Shaw (not the person that the island was named after), this barn measures 20′ wide by 32′ long with a 16′-wide shed, and is 24’6″ high.  The main gable area has a hay hood and door, with wood rail and steel trolley for the mow; the shed addition shows evidence of stanchions and a manure gutter, indicating that it was used as a dairy barn.  Nearby is an interesting assembly of farm-related structures, including a chicken coop, milk house, and root cellar.

Squaw Bay Farm Barn, Shaw Island.  This small barn measures 18′ wide by 30′ long and has a 7′-high ground floor and a 12′-high hay loft.  A simple wood frame structure, the loft does feature a hay drop.

Turn Point Lighthouse Mule Barn, Turn Point, Stuart Island.  This barn is part of the Turn Point Lighthouse complex that was designed by Carl Leich in 1893 and constructed in 1894.  Designed in the Queen Anne Style, the barn has a gable roof with hip on top, and measures 20′ wide by 30′ long; an open, 8′-deep verandah is located on the front elevation.  Originally designed for mules, it contains three boxed stalls and a fourth bay for tack.  The property is listed on the National Register of Historic Places.

Turtleback Farm Barn, Crow Valley, Orcas Island.  This barn was built on a farm that was originally homesteaded by Peter Frechette.  It is a simple gable structure, 24′ wide by 40’8″ long and 25’6″ high, that was built into the slope on a north-south axis.  Sheds have been added upslope on the west (6″ wide) and downslope to the east (20″ wide).  Although there are log posts in the main section, most of the structure is milled lumber.

Upper Farm Barn, San Juan Island.  Not much is known about the history of this barn (the name is contemporary).  Oriented east-west, it consists of a 34’4″-wide by 66”4″-long, 30’6″-high center drive hay mow flanked by a 23′-wide shed on the east gable end and a 28’2″-wide shed on the west end.  The four bay hay mow does not take advantage of the slope for different floor levels.  Both sides of the central drive have wooden platforms raised on top of logs.

Wilson Farm Barn, Lopez Island.  Originally farmed by the Wilson family, and later the McCauleys, this farm was eventually owned by Roy Berg.  The barn, which is largely deteriorated, consists of two gable-roofed sections: a main 30′-wide by 54′-long, 30′-high hay mow oriented east-west, and a 36′ by 30′ addition to the north.  Built of milled lumber in a post and beam system, the main portion appears to have had a center-access door to the hay mow as well as stanchions on the east side.  It is not clear what the north addition was used for.  The farm also has a milk house, granary, and remains of a silo.  The Wilsons probably built the main barn around 1905-1912, and Sam McCauley added the wing to the north in the 1940s.

Zapalac Farm Barn, Lopez Island.  This simple gable-roofed barn had a hay mow with a milking area, complete with stanchions, mangers, and manure gutter, along the side.  The post and beam structure measures 25’4″ wide by 30’6″ long and is 23’8″ high.  The approximately 8″-diameter posts rest on 6″ x 8″ girders that in turn rest on field stones; the upper framing structure was peeled logs.  The barn, which was recently restored, is part of a larger farm complex that includes a cabin, chicken coop, machine shed, and wood shed.