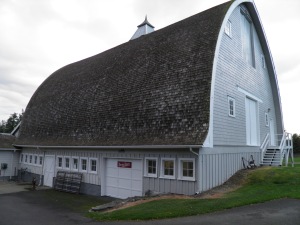 The Waldrip Barn on Orcas Island is unique in two ways: it is the only known extant gothic-roofed barn in the San Juan Islands and we know who the architect was who designed it!  Built in 1918 by Jesse Waldrip, it was designed as a dairy barn by W.R.B. Wilcox, an architect who practiced in Seattle from 1907-1922.  Based on a series of letters between Waldrip and Wilcox, the latter used standard plans from the Louden Company in order to design a barn for dairy cattle, featuring a huge hay mow/loft under the gothic roof and stanchions for milking the cows on the ground floor.  (Wilcox’s bill for his services came to a total of $23.80!)

The two-story barn measures 44′ by 60′, with stanchions, stalls, and work spaces on the ground floor and a 31’6″ tall hay loft, which features a hay hood, wooden hay rail, steel trolley, and cupola ventilator. The correspondence between architect and owner discusses several aspects of the design and construction: loft capacity, arrangement of stalls, and shingling vs. board and batten siding, as well as other farm buildings, including a silo and root house.